Posted on April 4, 2017 by raasayprimaryschool 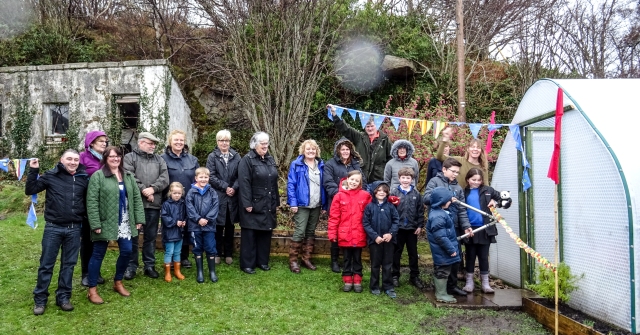 Pupils in Raasay Primary school recently participated in the Highland Council’s Carbon Clever Challenge which was organised to celebrate 10 years of the WWF’s Earth Hour. The pupils’ entry was a short film, highlighting the importance of taking responsibility for the planet by reducing C02 emissions. As a result they decided to film their very successful composting scheme which has been operating in the school for the last year whereby pupils with parental and community support, collect and weigh food waste from neighbouring houses and businesses which is then composted and used in the school garden. They record the data and over the next ten years the projected reduction in our carbon footprint from the project will amount to 17.5 tonnes. “We were delighted to hear that our project had received excellent reviews from the Climate Change team with the video being screened in Eden Court, Inverness as part of Earth Hour on 25th March and due to the special commendation the children received certificates in recognition of both the project and the short film with McTavish the Earth Hour Panda taking up permanent residence with us here at Raasay Primary School. I would like to congratulate pupils, staff, parents and wider community for the success of the project as a whole.” Wilma Duncan, Head Teacher

Over the course of the coming years, the school hope to produce lots of fruit and vegetables in the garden that have been nurtured using their own local compost. If you would like to view the pupils award winning entry – please search in Youtube by entering Raasay Primary Earth Hour Challenge.