Posted on March 7, 2019 by raasayprimaryschool

After reading a story ‘The Making of Milton’ where a young boy loses his courage and a mysterious stranger gives him a ‘jar of courage’, pupils made their own ‘jars of courage’. They had to identify areas in their lives where courage was required – they came up with a list which included such things as: attending events off the island, performing in the Christmas show and tackling new skills in Maths. Here they are decorating their jars. 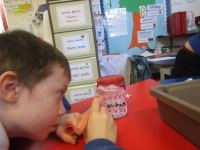